There are two main alternatives, feeding by battery and direct feeding while driving. Both of these methods are more than one hundred years old. Battery cars attracted a lot of interest in the end of the nineteenth century and electric trams were used and still are in many cities. Trains and subways are electric to a great extent.

So the question is: Why this has not been applied to road vehicles?

The answer is that fuel has until recently been very inexpensive and the Otto- and Diesel engines have developed enormously during the last hundred years. Batteries have not been developed as extensively. Development was almost at a standstill for many decades, but has picked up speed in the last decades and now gives us much hope that they will become a useful alternative for electric cars.

Trams were also underdeveloped during the last century. The whole concept was considered difficult with a lot of wires in the air inside the cities and in most cities ordinary buses replaced them.

And what about the future?

The cost of fuel will probably rise when the oil peak comes closer and the danger of CO2 might be confirmed. Then the only reasonable alternative will be electric vehicles.

The next question is how this should be done technically.

At present the big interest is battery cars. Unfortunately, the batteries despite big improvements have two problems, energy density and charging time.

Energy density
Even the best batteries can only store 0.36 to 0.9 MJ/kg. Compare this with diesel that has an energy content of 41 MJ/kg. The difference is less if the efficiencies of the diesel motor and the electric car are considered. Lithium ion batteries has 0.9 MJ*85%/(41 MJ*40%)*100 = 4.7 % of the energy of the diesel car by volume [[1]] . This means that one needs twenty times more batteries than diesel fuel to travel the same distance between refuelling/ charging. Actually, the batteries would need to be even bigger such that the overall weight of an automobile would increase due to the additional weight added by the batteries.

Here a lot of development is being conducted but the challenges are overwhelming. If a car refuels 60 litres in two minutes the same battery car would need a power of

If a pumping station has ten pumps the whole station would need 80 MW power which is the energy requirement of a small town. This is of course possible but one has to be aware of what it means.

Probably the biggest problem is for the batteries themselves to be charged in about the same time as it takes to refuel a car without overheating the batteries.

The solution
Not only are batteries costly to maintain, they also need to be recharged or replaced regularly.  An alternative method would be to directly feed a vehicle with electricity as it is running.  This would mean that the automobile would not have downtime for recharging and a series of recharging stations would not be required to supply replacement batteries.  Electric feeding can also bring efficiently generated electricity from distant locations (such as a hydroelectric plant or solar power field like the Sahara) and bring it directly to the vehicle, as it is moving.

This would make electric vehicles even more efficient as they would not need new batteries as often or change of batteries.  Electric feeding of road vehicles is already preferable today and will be even more so in the future. In order to solve the problems described above one can use batteries and charge them while driving. The picture below demonstrates how this could be done.

The figure shows schematic roads in a mesh with big and small roads. On the small roads, which constitute the major part of the roads, the vehicles run on batteries. On the big roads with more intense traffic and longer distances to be covered, the batteries are continually charged while driving.

Sweden has around 2,000 km European highways and county roads. If these roads were distributed evenly in a mesh over all Sweden the mesh size would be around 45 km squares. This is pretty much how the road system in Sweden looks like but the mesh size is smaller in the south of Sweden and sparser in the north where there is less population.

The battery cars would accordingly only have to be designed to drive within one square of the mesh. This is an acceptable and manageable requirement.  Battery cars can meet this requirement already today. A distance of 100 km would give a good margin of error. Within one square it could also be possible to charge the vehicle from the grid, for instance at a summerhouse. The time for charging would be longer, but that would not be a problem as it could be done overnight or while parking for a meeting or other stop.

When driving long distances the norm is to use big roads.  If we have a system where the larger roads are electrified it will actually be better than today’s system. An electric car would then be able to drive from the north of Norway to the south of Spain without stopping for refuelling or charging.

Optimizing the mesh
The optimal size of the mesh depends on the cost of electrifying the road compared with the cost of batteries. The more expensive the batteries and the lower the cost of the road grid, the smaller mesh size and vice versa.

The picture below shows a combination of electrifying roads and batteries. It is assumed that batteries cost 350 USD/kWh. This is not the current cost yet but the stated goal for most manufacturers of electric car batteries.

The cost to electrify the road is assumed to be four million SEK per km, which is the cost assumed for conductive charging (Elways solution). 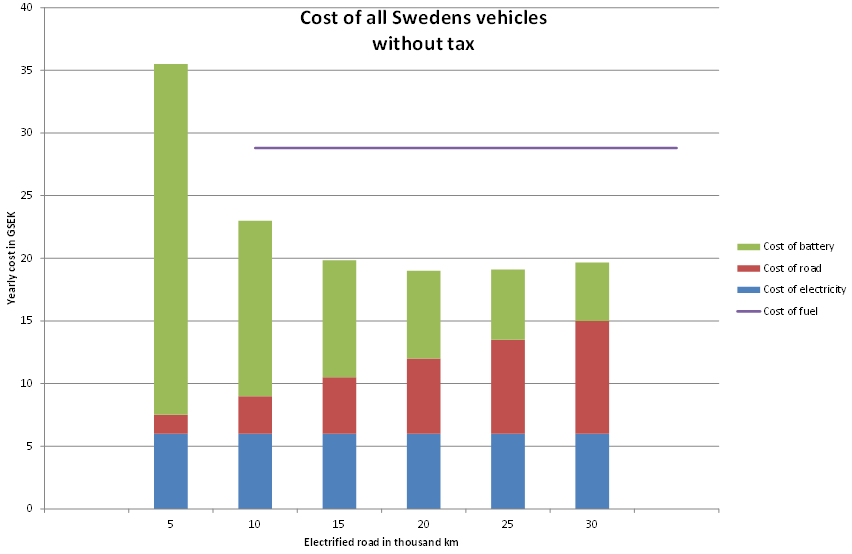 The optimal total cost is achieved with by electrifying 20,000 km of the road